skip to main | skip to sidebar

A total of 36 players from several Northern California clubs competed in the Aug. 10 event at the La Petanque Mariniere courts in San Rafael. It was an inter-regional  event with a mixed doubles format with one player having to be over 65 and the other under.

For a report from the ever colorful correspondent Efron Alain, check out:
http://www.cochonnetmarin.com/blog/
Posted by bleysrose at 11:50 AM

Men's Singles: 36 teams competed. 20 advanced into the concours and 16 into the consolante

Women's Singles: 17 teams competed. 9 advanced into the concours and 8 into the consolante

The Lamorinda Petanque Club will be hosting both the
2014 FPUSA Men's and Women's National Triples Championships
on August 2 and 3, 2014 on their terrain at 480 St Marys Road in Lafayette, California.

In addition to being National Championships, these are Qualification Tournaments:

The Men's Triples Championship will determine the Official U.S. National Team for the
2015 F.I.P.J.P. Men’s World Confederations Cup Tournament which will be held in New Caledonia in late 2015.

The Women's Triples Championship will determine the Official U.S. National Team for the 2015 F.I.P.J.P. Women’s World Championship. The venue will be announced when details become available.

On Sunday, August 3 there will be a consolante tournament, the FPUSA Federation Cup Select Triples Tournament in which any licensed FPUSA member may participate.

Our terrain will be open on Friday, so you can come on down and familiarise yourself with the pistes. Registration and start times for both Saturday and Sunday are contained in the Tournament forms.

You will get all the Forms, Rules and other information you need by visiting the 2014 FPUSA Men's and Women's National Triples Championships website.Please click this link to get there:http://2014qualifiers.weebly.com/

This link is also posted on the Landing Spot
Posted by Anonymous at 3:14 PM

13 teams competed from the NorCal and Southwest Regions.
Peter, Mickey and Holly edged out Peter, Narin and Barbara  with a score of 13/10

31 players competed from the NorCal and Southwest Regions.
Peter beat Jer 13/4 in the Final.

11 players competed from the NorCal and Southwest Regions.
Narin beat Erin13/12 in the Final.


Pictures by Linda Mottschiedler
Posted by Anonymous at 7:01 PM

20 teams competed including players from OR, MA, PA, ME, and FL. Malek/Ernesto beat Philippe/Eric 13-12 in the final.

Posted by Anonymous at 6:23 PM

FPUSA Northeast Inter-regional Singles (all in)

28 players competed, including FPUSA members from Portland, OR; Boston, MA; Florida, and Maine. Philippe beat Steve 13-6 in the final.

Posted by Anonymous at 6:14 PM

SILVER  Peter Wellington/Mike Cooper (both Valley of the Moon PC)

Posted by Anonymous at 2:23 PM

Fresno Petanque Club hosted three
FPUSA Title Tournaments on the 26th and 27th of April.
on their pistes at Cary Park, Fresno, CA.

South Florida Petanque Club in Lake Worth, Florida hosted the 2014 FPUSA SOUTHEAST Inter-Regional 65 Over/Under Select Doubles tournament on Sunday, 23 February.
"We had 18 entries and all went well until the rains came, but the sun came back out and we finished before dark and had a good time."

7 teams competed on February15 at the Sarasota Club de Petanque in Sarasota, FL

Posted by Anonymous at 2:21 AM

15 teams competed at Boca Petanque 2000 on Febraury 1st. Another good turnout and a good day of competition. 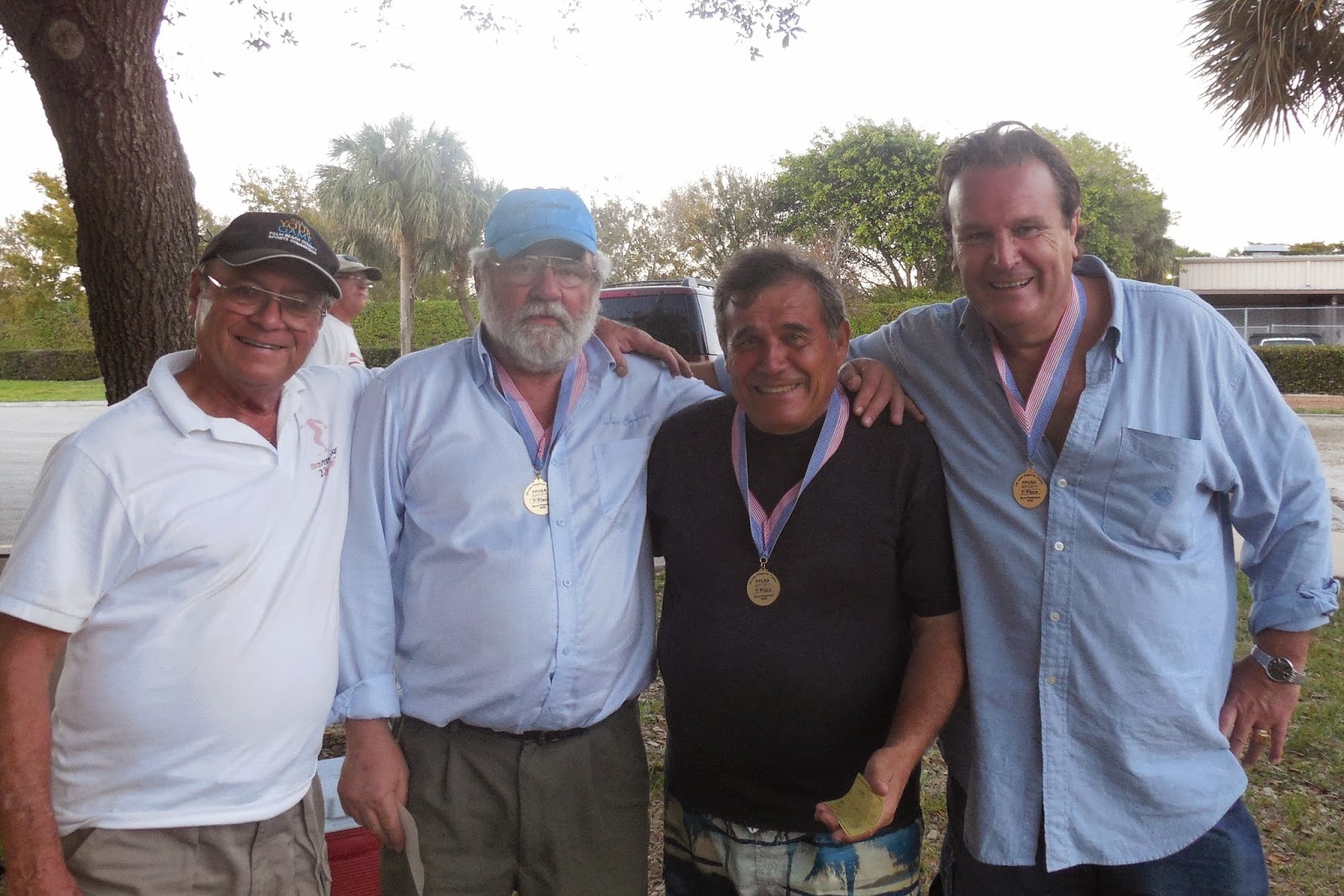 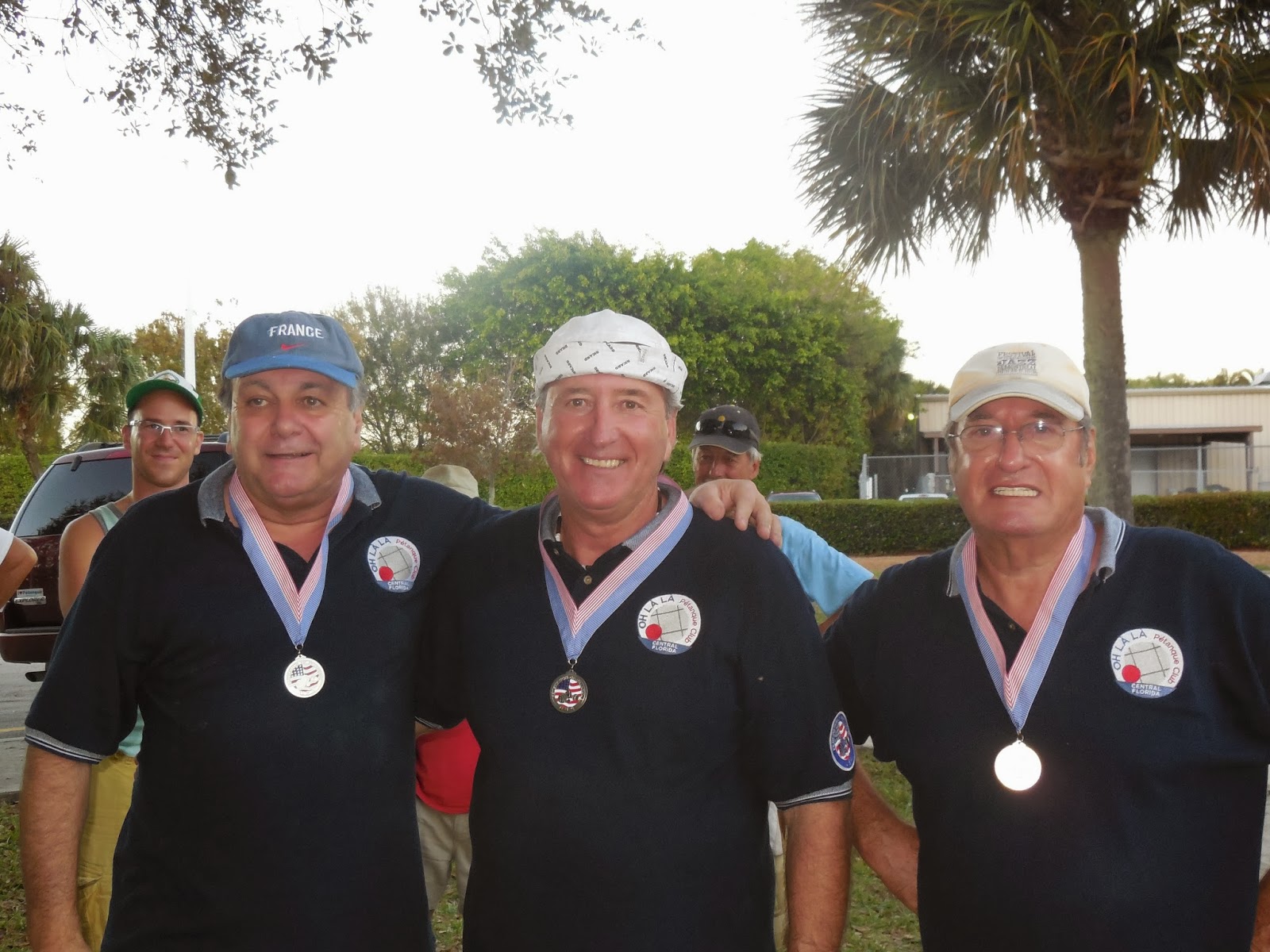 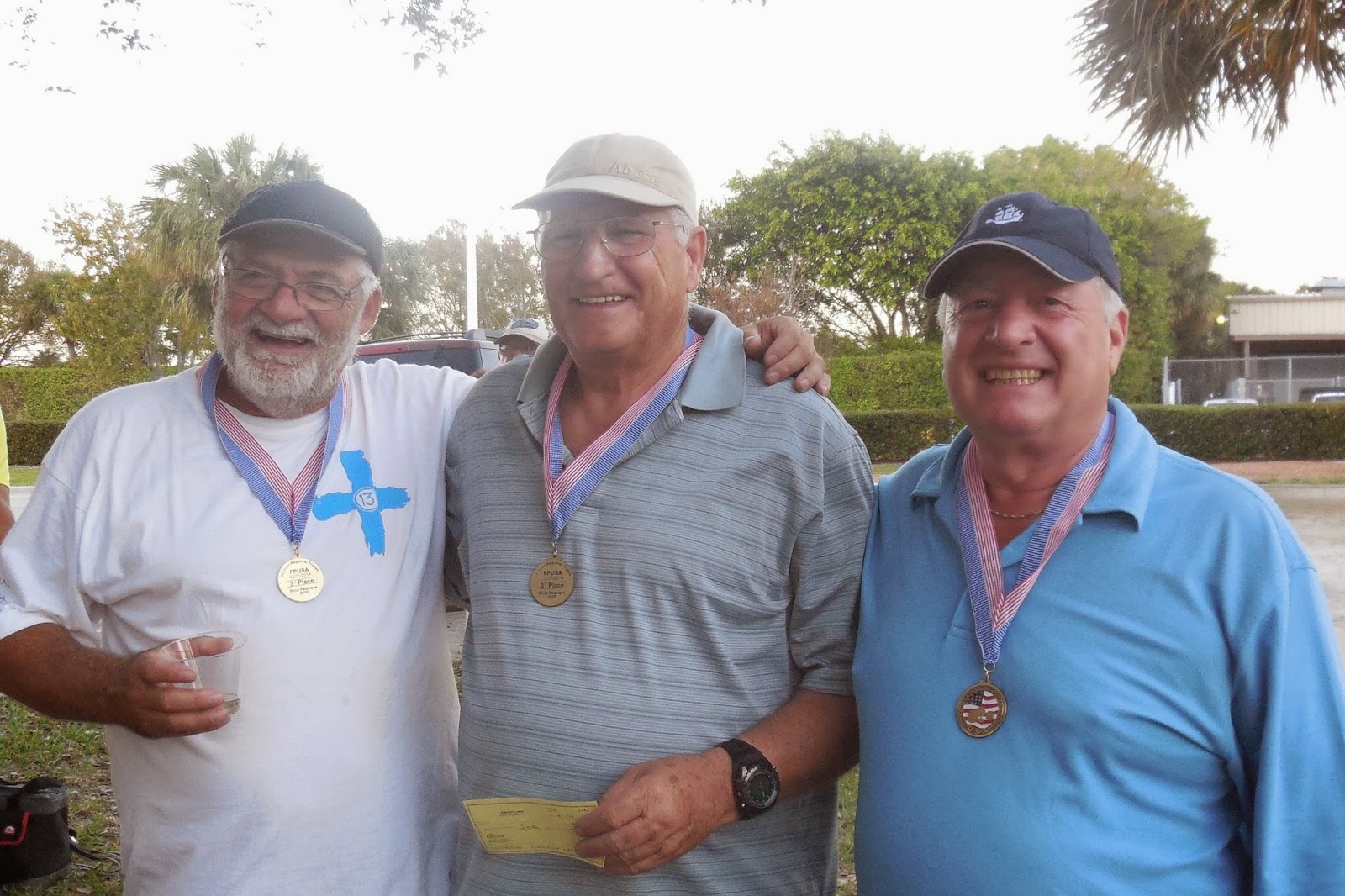 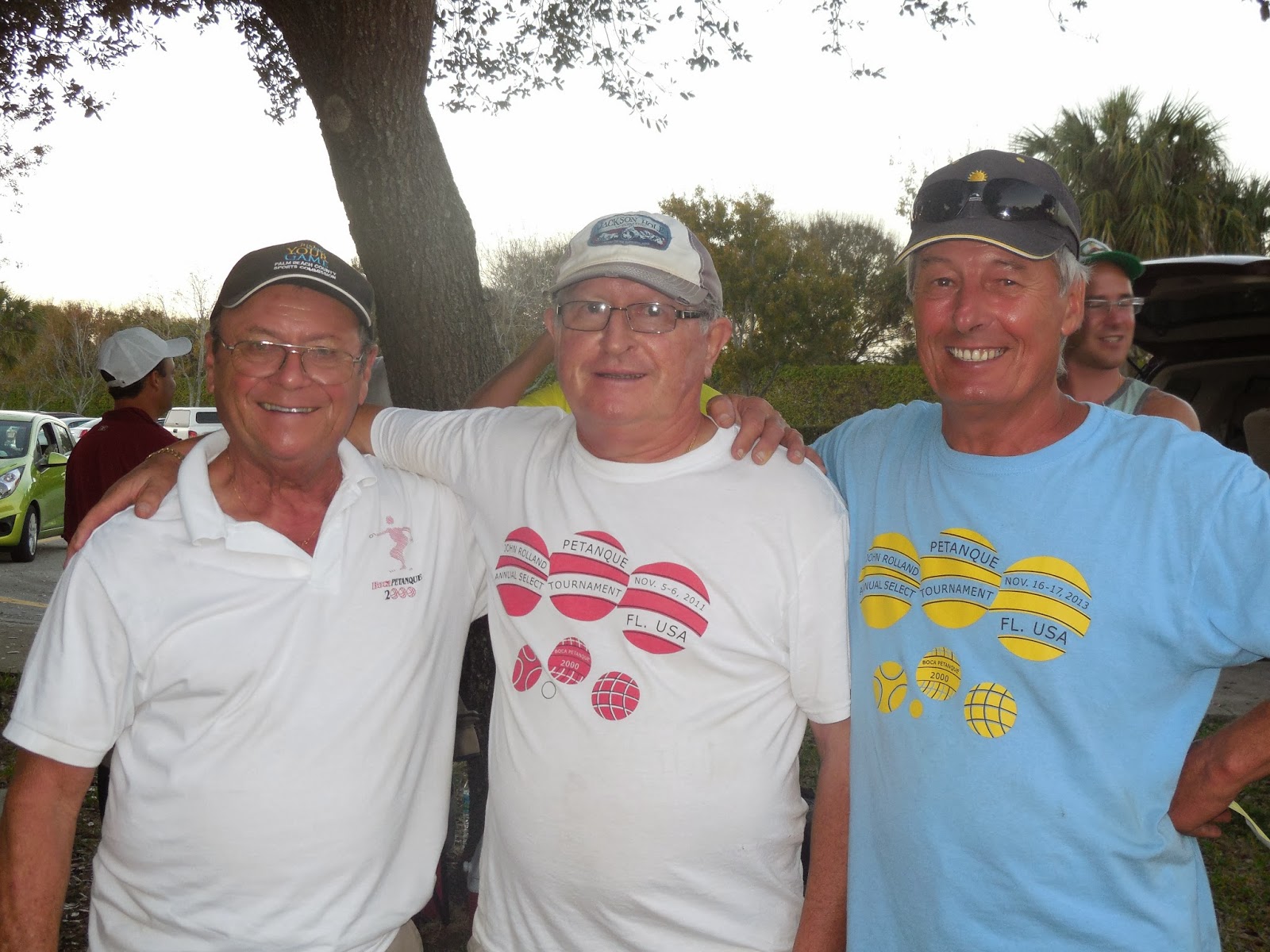 14 teams competed on January 25th at the South Florida Petanque Club in Lake Worth.

18 teams competed. Result supplied by John Rolland. If someone wants to add some more details or photos, please feel free to add comments! 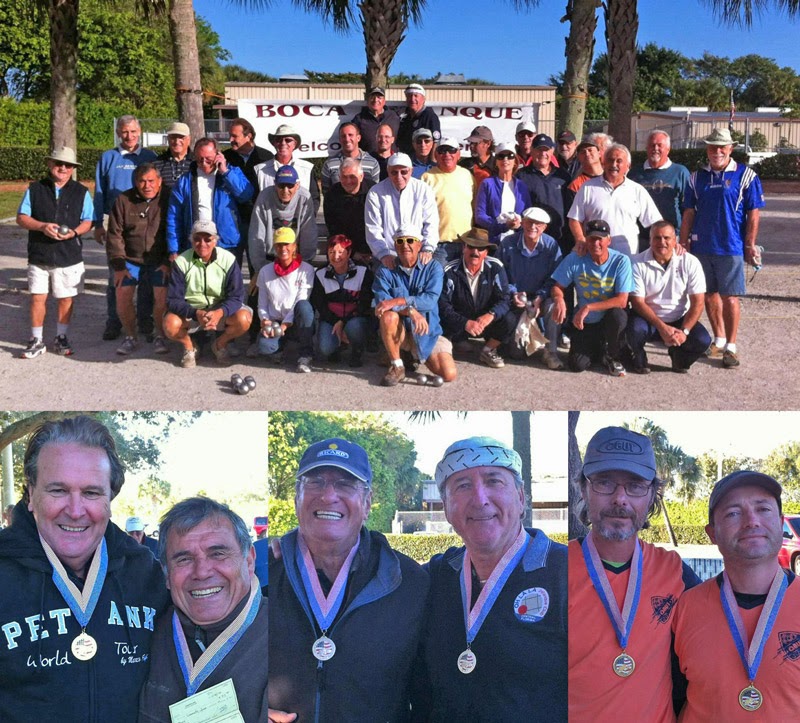 Posted by Anonymous at 2:04 PM 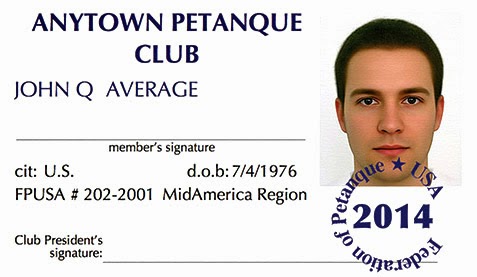 Dear Members,
Please renew your membership with your club before the end of this month to avoid the $5 late fee.

Thanks!
The Management
Posted by Ed Porto at 1:31 AM

By Chicago Petanque Club · Updated on Sunday
It was a sunny, cool, day of sizzling pointing and blazing shooting in Downers Grove. The plentiful, tasty pastries and hot chocolate made it the perfect petanque day with the Downers Grove North French club. Fun time for all. Thanks to the CPC for making this event possible!

Our man Ziggy giving a few pointers to the students.


In an effort to introduce and promote petanque to all ages of the population, as well as maintain our favorable relationship with the City and Community, the Amelia Island Boules Club reaches out to the County’s High Schools. Saturday, we held the second annual County-wide High School Tournament, with teams representing the schools competing against each other. A picture is worth a thousand words—you only need to look at the picture below to see that a great time was had by all!

As a result of the club's efforts, the Amelia Island Boules Club now boasst 130 members, born in every decade from the 1920’s to 2000, and has been the largest club in the U.S. for the past two years. Keep up the good work! 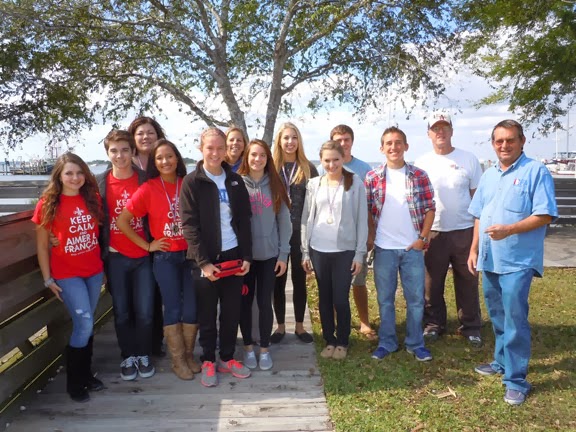 Petanque In the USA

Federation of Petanque, USA is a non-profit sports organization whose purpose is to build a national body of FPUSA - affiliated clubs and individuals dedicated to spreading, practicing and enjoying Petanque, a worldwide outdoor bowling game of modern French derivation via ancient Greece and Rome.A gracious thank you to Dexter Darden for his participation on the project and a big thank you to all the petanque enthusiasts who have made it into the final creation. This would not be possible without your support and generosity. Also a special thank you to the Kitt family.

Created by Artem Zuev. Written by Karina Morgenstein.
Posted by Anonymous at 7:42 PM

Visit the New FPUSA Facebook page, 'like' us and get get petanque news and information from FPUSA Clubs.

Posted by Anonymous at 4:52 PM

The Women's Team  is in Montauban! They will play their first game on Friday, 4 October at 2:00PM. You can follow their progress on the Web by going to http://www.ffpjp.info/index.php/programme-championnat-monde to see the playing schedule and all the tabulated results.

You will also be able to watch Web-TV FFPJP and catch various games live. Go to http://www.worldtimebuddy.com/ to figure out the time difference for your area.

Posted by Anonymous at 3:52 PM

Starting in Zanesfield,OH October 2 and finishing in Austin,TX October 27

On September 7th and 8th, 2013, 14 doubles teams and 9 Mixed Triples teams gathered in Blue Hill, Maine to compete in the Federation Petanque USA Northeast Regional Select Doubles and Mixed Triples tournament.  The tournament was hosted by the Maine Boules Club, whose home is located in the Boatyard at Webbers Cove. 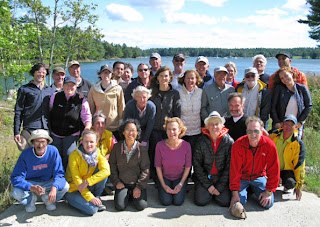